Celtic Herbs to “eat, drink and be merry” through the Ages 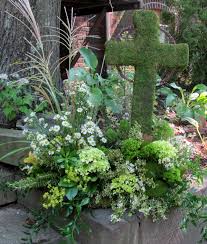 The Celtics were a rural people by choice, preferring to live close to nature because of their love of the land and their view of themselves as being the caretakers of Mother Earth. The Druids were the spiritual guardians of the Celts and made sure that each Celtic citizen led a healthy holistic lifestyle. Exercise and proper diet were important as was a healthy spirituality, reflected in the many festivals of the Celts. The Celtics practiced animism, a religious belief that all things contained a spirit: the water, trees, rocks, the land itself, and for this reason showed extra care towards nature, lest they grieve a spirit.*

The druids, a caste of priests that can be traced back to prehistoric times survived the invasion of Roman and Scandinavian tribes by settling on the edges of the Atlantic– the “British Isles”. They brought with them all their knowledge and herbs from ancient Greece and Rome, along with Christian traditions as well, making the Celtic culture in the Middle Ages a rich and colorful one.

Everyday food—Oat-meal which was much more important than wheat or bere barley as a food source was prepared in many different ways e.g. porridges, boiled in its un-ground state as a gruel or ground and boiled in fresh or sour milk, flavored with honey and seeds, salt or herbs. Porridge was made very thick as a morning meal or almost liquid, in the liquid state it was usually eaten at night. Porridge was consumed both hot and cold (Danachair 1958). Many of the foods found on medieval tables are familiar – mutton, beef, veal, venison, fish, apples, pears, cherries, leeks, onions and cabbages. Honey was used to sweeten food. Food was often strongly seasoned with herbs and spices, including garlic, rosemary, fennel, mint, parsley, cinnamon, peppercorns, root ginger, cloves and nutmeg. Some spices were imported via the Pilgrim routes to the Holy Land after they were brought back by crusaders. Salt was very expensive; it became a status symbol for kings and rich nobles. Some medieval dishes, such as meat jellies, seem very strange today. The cauldron was a central place for most of their meals where they made stews from their hunting and gathering. Aw, but their feasts were special with ceremonies and special herbs added to the celebration!

Drinks- history showcases the fermented drinks, though herbal tea was consumed  as tonics and remedies according to sources on the history of herbalism  and Herbal tea, or, more properly, tisane (UK /tɪˈzɑːn/, US /tɪˈzæn/

A great deal of the corn grown was made into ale which was flavored with herbs, plants, honey and spices and was drunk hot and cold by the whole family. It is not known if the ale produced was fermented sufficiently to cause intoxication. (O’Brien Education 1972).

Mead, the oldest alcoholic beverage in the world, was considered a delicacy by the Irish and was consumed before the start and after a feast. The great banqueting hall of Tara the seat of the High Kings was known as the Mead Circling House. Mead was made from fermented honey and water with herbs and spices, and finished by sweetening it with additional honey.

The Renaissance, the end of the Middle Ages ushered in a high tide of cultural activity, including a reappraisal of herbalism, with 1)  the rediscovery of classical arts with old herbals, 2) the spreading of prints of these herbals , 3) Portuguese and Spanish conquistadors brought back strange, new herbs that roused the interest of botanists, pharmacists, and doctors.*

In summary, Celtic food and drink is enhanced and enjoyed with the addition of herbs in every Age. Enjoy life more with the freshest and healthiest of herbs!

More fun with herbs can be found in this printable document where page 2 has the “bright” Celtic meanings of herbs.